SANTA ANA, California –March 15, 2017: Irvine Scientific, a world leader in the development and manufacture of cell culture media and Assisted Reproductive Technologies (ART), today announced the implementation of MEGA, a new mouse embryo assay that measures gene expression, to its quality control testing of raw materials used for the manufacture of media for in vitro fertilization (IVF). In studies, MEGA demonstrated increased ability to detect embryotoxic materials that could adversely affect embryo development.

The mouse embryo assay (MEA) has been long used as the standard method of testing raw materials and components used in IVF media and ART. MEA assesses embryo development based solely on morphology at a single point in time, an inherently subjective measure. Increasingly fertility organizations worldwide as well as numerous publications, have called for more relevant and sensitive testing of IVF media and the raw materials used in their production.

Using embryos from a genetically-engineered mouse strain, MEGA employs a functional molecular biomarker to improve the detection of toxic media or any other environmental stress that may negatively impact early development. The assay measures both the early fluorescence intensity (EFI) and location of fluorescence produced by green fluorescent protein (GFP), which is expressed under the control of the Oct4 promoter (also known as Pou5f1). Regulation of Oct4 expression is one of the most critical early indicators of normal embryonic development.

Some materials, such as oil for embryo culture and human serum albumin (HSA), pose high risks of toxicity and producing suboptimal culture conditions. Data during development showed that MEGA was able to detect toxicity at much lower levels than MEA in studies using previously identified adulterated (PID) oil. MEGA detected levels as low as 5% compared to MEA’s limit of 10%. Testing of HSA indicated MEGA was able to eliminate lots that were suboptimal and to identify lots that produced the best culture conditions.

“As leaders in the development and manufacture of ART we set out to invent a new, more sensitive and informative assay for both screening of raw materials and quality control testing of finished products,” said Jessie H.T. Ni, Chief Scientific Officer, Irvine Scientific. “The deeper insight into embryo development at a genetic level that MEGA provides enables us to produce products of the highest quality and performance." 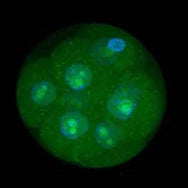 About Irvine Scientific
Irvine Scientific, a member of JX Group, is a worldwide leader in the innovation and manufacture of cell culture media, reagents, and medical devices for researchers and clinicians. The company provides unrivalled service and quality to scientists working in cell therapy and regenerative medicine, assisted reproductive technology and cytogenetics, and industrial cell culture for the large-scale production of biotherapeutics and vaccines. Irvine Scientific adheres to both ISO and FDA regulations and operates dual cGMP manufacturing facilities in California, USA and Tokyo, Japan. The company’s consultative philosophy combined with expertise in cell culture and compliance provides customers with unique capabilities and support. For over 40 years, Irvine Scientific has remained uniquely flexible and focused on media while becoming a strategic global leader in media products and services.