Not all cell lines are created equal—and neither is their associated media.

To achieve the desired target performance, the design and development of an optimal cell culture medium demands additional improvement intended specifically for the selected cell line. Typically, this means the development is done at bench scale by mixing stock solutions to create a final formulation, or by performing a media survey, or screening, to find a “good enough” starting point.

Critical tools used in advancing the starting point towards a final medium formulation include (but are not limited to) spent media analysis (SMA), which fingerprints the selected cell line, along with rapid prototyping to ensure the scalability of the chosen medium (Figure 1).

By teaming up with a skilled cell culture media partner, you can rely on their expertise in executing these tools to develop and manufacture custom media for your unique cell line.

Once you have identified your target performance, one of the first steps is to conduct a screening of media readily available to determine the “good enough” starting point. During preliminary media screening, samples are taken throughout the duration of the culture. Once completed, the next step is to see what is happening at a chemical level inside the culture.

Data obtained from SMA at multiple time points of the culture duration assist in determining, and understanding, potential limiting factors that might affect the kinetics and growth/production stages of the cell during culture.

The next design prototype for testing is developed based on those results. The process is then repeated to test the new prototype. Typically, several rounds of prototyping and analysis are required before the optimized formulation specifically for that cell line is locked down.

We conducted a case study to demonstrate how we applied these methods to achieve desired titer improvement through media optimization. Two types of analytical methods utilized by Irvine Scientific R&D are chemical analysis and protein characterization (Table 1).

Chemical analysis is useful because it provides snapshots of information on how a cell line performs in regards to consumption/depletion levels of specific chemicals in the media. Chemical analysis, which consists of three analytical methods to determine specific chemical component quantities that can be detected at M or mg levels, is frequently utilized. These analytical methods can be applied to any media optimization project targeting titer or cell growth improvement.

The CHO cell line we utilized was grown in readily available off-the-shelf media as a starting point to develop a customized medium for this specific clone. The initial media screening was performed in BalanCD® CHO Growth A with the clone. From media analysis, specific amino acids were identified to be limiting sources to the clone’s performance. The design of prototypes for supplementation strategies was determined from amino acid demands of the cell line due to cell growth and recombinant protein production.1 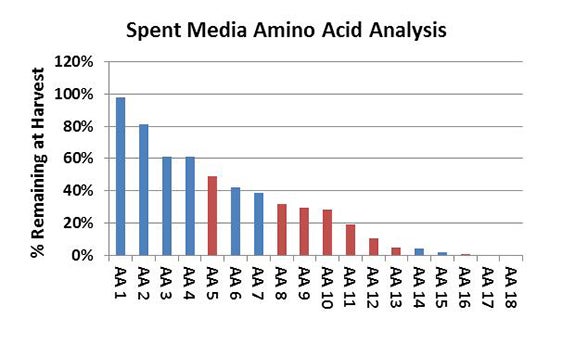 From SMA, four different prototype media were designed to address the limiting amino acids. The prototype media was then tested against the original BalanCD CHO Feed 4. The resulting titer levels ranged between 1000 and 1400 mg/L (Figure 3). “Prototype D” was chosen as the best performing feed medium. 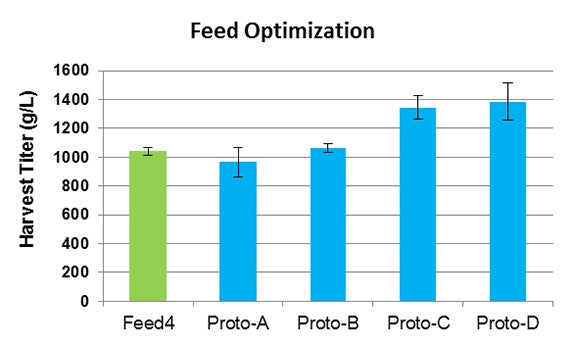 Figure 3: The product titer of the clone from the Fed Batch with the Feed 4 and Feed prototypes A-D media achieved around 1000 mg/L to 1400 mg/L range respectively.

Another highly beneficial tool we offer at Irvine Scientific is prototyping, such as the Express Media Service™ (EMS), which is intended to be used for manufacturing prototypes at a rapid pace.

In many ways, the EMS lab should be considered as an extension of a customer’s lab. This lab can take your prototype from a design on paper to a finished medium typically within 10-days or less. More importantly, the EMS lab uses the same qualified raw materials, as well as similar manufacturing equipment, to the cGMP facility. Therefore, the media made by the prototyping/EMS lab is often best used for the following intentions:

While the formulation on paper looks like it should work, that is not always the case. There are often solubility issues due to unforeseen interactions with chemicals. By creating several iterations of prototypes during the development stage, we can address potential manufacturing issues, such as solubility limits, dissolution time, and maximum batch sizes.

It is well known that many correlations and relationships have been proposed for the scale-up of chemical processes, yet these equations are not always applicable to their biochemical or bioprocessing counterparts.2

Just because it works at 1 liter does not mean the dynamics are the same for 100 liters or more. Thus, the EMS team works directly with the project scientists to assist in the development of cell culture media that not only meets the needs of the process but also the requirements of large-scale production.

Small-scale pilot batches of “Prototype D” from the case study were produced to mimic the cGMP production scale. These batches gave us insight into the dynamics of the production process. The main goals of the prototype/pilot batches are to reduce variables, improve consistency, and scale-up seamlessly.

As said by Terrell Johnson, “To manufacture highly purified biopharmaceuticals of consistent quality requires a well-defined production process.”3 Your cell culture media partner should assist you in achieving your goals with their optimization programs, such as analytical analysis and prototyping capabilities.

Ultimately, at Irvine Scientific, our end goal is the same as yours—to achieve the most optimal medium for your unique cell line.

Brandy Nunez received her B.S. in Microbiology from Cal State Long Beach. She started at FUJIFILM Irvine Scientific in 2008 as a technician in R&D developing media for the production antibodies. Currently Brandy is the Group Lead of Prototyping within the R&D department.

David E. Ho received a M.S in Chemistry from San Diego State. He started at FUJIFILM Irvine Scientific in 2009 within QA and in 2011 transition to R&D as a Scientist. Currently, he is supporting projects requiring analytical capabilities and New Technology involved projects.