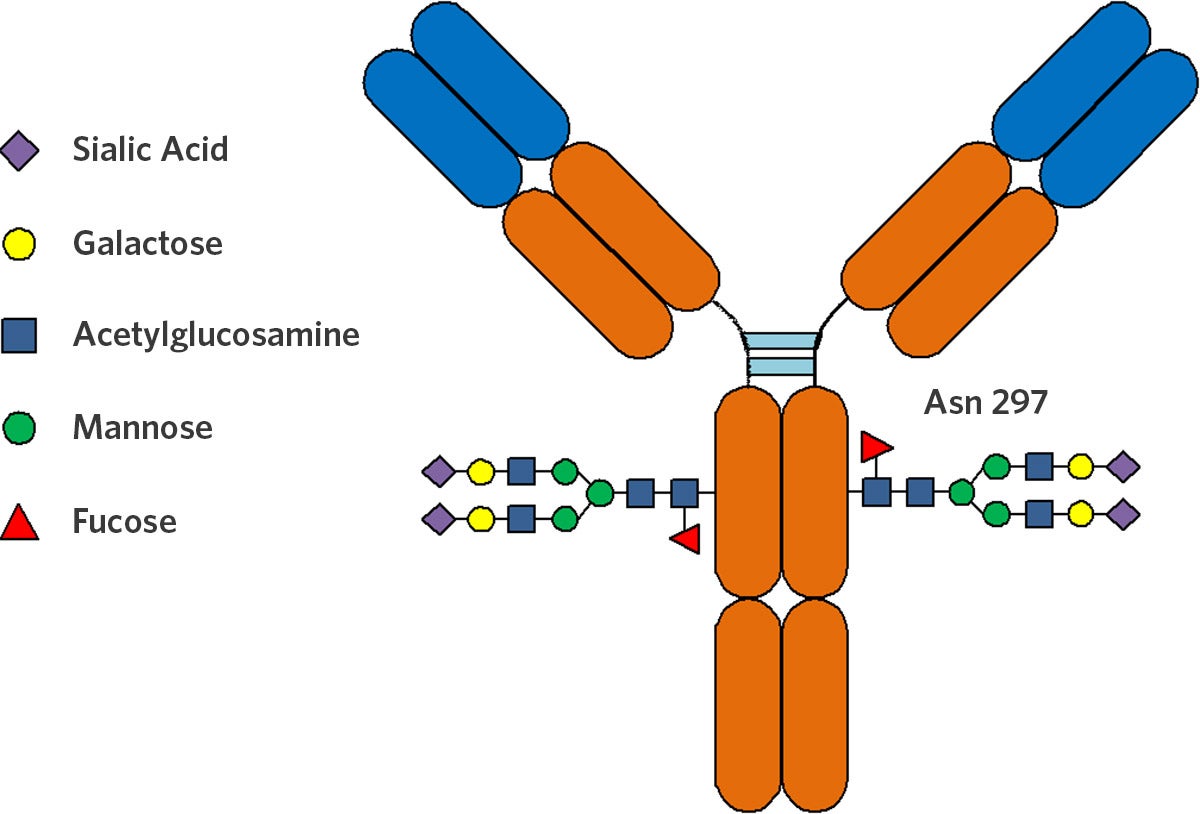 Protein-based therapeutics are dominating the pharmaceutical market due to their high-efficacy in treating complex diseases.1 The demand for antibody (Ab) drugs continues to rise as the global market reaches $84.5 billion USD in 2017 and is expected to reach $114.6 billion by 2022.2

Blockbuster drugs continue to lead not only the Ab drug market but the pharmaceutical market as a whole. As the Ab drug market becomes more aggressive, there is greater pressure for pharmaceutical companies to develop more therapeutically effective Abs. As a result, product quality is becoming more critical in developing the most therapeutically effective Abs.

Glycosylation—or the attachment of sugars to organic molecules—is a critical product quality aspect that has been steadily gaining attention. The type and level of glycosylation can significantly alter Ab binding, function, and therapeutic efficacy of the drug.1,3

In the following study, Irvine Scientific assessed the ability of media supplements to modulate Ab galactosylation levels and developed an "Optimized Supplement," which significantly increased galactosylation, and resulted in more therapeutically effective Abs.

The different DoE conditions had little to no impact on viable cell density and viability as cell growth was similar to the fed-batch control (Figure 1A). Similarly, day 14 titers were minimally affected by the supplements (Figure 1B). The glycan profiles were measured, and selected results are presented in Figure 1C. At 14%, the control with no supplement resulted in the lowest percent galactose. The various DoE conditions resulted in increasing galactose levels from 25% to 50%. DoE analysis with criteria of high galactosylation and minimal impact on cell growth and titer resulted in a supplement composition deemed "Optimized Supplement."

All of the supplements, except those from Supplier 2, resulted in Ab titers similar to the control (Figure 3B). Due to the poor growth, and subsequently low titer from Supplier 2's supplement, Supplier 2 was excluded from further evaluation. The remaining Abs were analyzed for glycosylation; the results are presented in Figure 3C.

All the evaluated supplements were able to raise galactosylation; however, only the Optimized Supplement and the 2X Supplier 1 Supplement resulted in over 40% galactosylation. To evaluate the functional activity of the Abs, an in vitro complement-dependent cytotoxicity (CDC) assay was conducted on the highly galactosylated Abs (Figure 3D).

The Optimized Supplement outperformed all other suppliers' supplements and resulted in the best overall cell growth, titer, galactosylation, and Ab function.

Overall, Irvine Scientific can optimize media for increased galactosylation, as well as measure glycosylation levels, and evaluate the therapeutic function of Abs. This allows for cohesive control of product quality that can be utilized to improve Ab drug efficacy by further understanding the relationship between protein structure and function. Nevertheless, each Ab is unique, and one culture process may not produce the same product quality for every Ab. Therefore, each Ab and application pair may need its own media optimization process to produce the most effective Abs.

Through our media development and optimization services, Irvine Scientific can help you develop a custom supplement to help produce Abs with optimal galactosylation levels and maximal efficacy in your specific process.

Kevin Tan received his PhD in bioengineering from the University of Washington where he developed non-viral gene delivery vehicles for the brain. Previously, he attended UCLA and investigated amino acid-based nanoparticles for cancer applications. At FUJIFILM Irvine Scientific, Kevin currently develops and optimizes serum-free, chemically-defined media for antibody production.